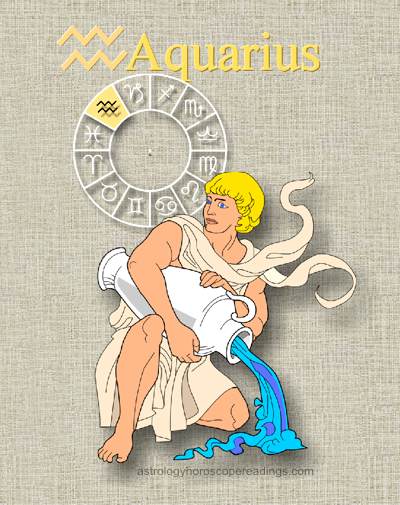 The energy of Aquarius is spontaneous, free, independent and original. There is an attraction to new things, ideas and technology.

Aquarius rules the ankles. It is associated with revolutions, science, social progress, peers and the new age.

When pulled out of center, Aquarius can be rebellious, willful or confronting, in order to protect freedom and independence.

The key for sun in Aquarius is to reconnect to the freedom and spontaneity at the core of the heart, and to the joy and aliveness of the inner child. From this place, there can be a sharing and kinship to the unique offerings of others.

Aquarius is often pictured as the water bearer. Water is being poured out of a vessel, while looking backwards. What is being depicted is the offering of knowledge that is alive and vital, that flows and it is shared. In many cultures, flowing water purifies and removes the impressions of the past. Nevertheless, the water bearer is looking past his shoulder, indicating that often, what is offered as change in the present is in response to what has been.

When Aquarius is in Their Freedom and Uniqueness

Famous People with Sun in Aquarius

The Depiction of Aquarius

The ancient depiction of Aquarius is the water bearer. Some people mistake this as indicating that Aquarius is a water sign, but it is an air sign.

It is the only depiction of a sign that has their fame and contribution expressing forward, as depicted by the fluttering of the clothes, even though the depiction shows Aquarius looking backward.

Nevertheless, the downfall of Aquarius is that although they pour out of the freedom of their feelings and are forward leaning, their gaze looks backwards, towards Capricorn. The consequence of not acting out of the freedom of their hearts but by their reaction to the past is that often the contribution to the future becomes a revolution, bring things back where they started, because in trying to change the past, they often recreate it.

The ankles are related to Aquarius as are the wrists, as each allows great freedom of movement as they engage uneven terrain or the objects that need to be handled. The Glyph of Aquarius shows the ripples of change, on the outside and on the inside.

With the moon in Aquarius, their is a pull towards feeling free and a need for  independence. The mother may have been experienced as unpredictable or even emotionally inconsistent.

There are several things that sun in Aquarius needs to be mindful of in order not to set themselves up during the Mercury Retrograde Cycle. Often the issue is about the need to re-establish a sense of autonomy and freedom when there is a sense of feeling caught, trapped, held back or challenged. If the response towards protecting freedom is reactive, willful, rebellious or confrontational, then the risk is that better judgment is cast aside and important details are overlooked because of the heated exchange or the need to re-assert the will.

Especially at the beginning of the retrograde cycle, it is important for cool heads to prevail and to re-check if a decision or course of action is be