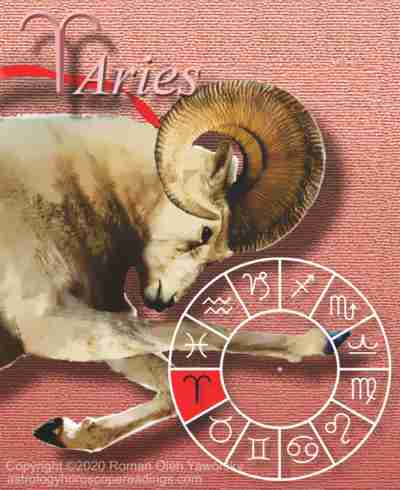 Detail from Roman's upcoming book on the Astrological Signs

Aries tends to be the trail blazer, a very assertive energy, like that of a warrior, very independent and direct. The impulse, energy and enthusiasm comes from the heart. There is a drive for freedom and independence, and a tendency to act alone.

It is important, as with the mythical warrior, for Aries to protect and act from the freedom and courage of their heart. To preserve that freedom, Aries needs to avoid being entangled in the emotions or needs of others. Otherwise, they risk being pulled out of their independence. When this happens, they may become reactive, inappropriately impulsive or lose their enthusiasm and their reactions may be interpreted as overly self concerned, rash or inconsiderate. Under these conditions, Aries is more accident prone and invites resistance and challenge from others.

To regain independence, Aries needs to refocus on taking care of their own heart and acting through their enthusiasm. When that is shared, actions are more appreciated and may inspire others.

The astrological sign Aries is depicted as a ram, moving headfirst with its right leg extended forward and using its right hind leg to propel itself. The front left leg protects its heart.

In real life, when rams butt, both their front legs are over their heart and the whole focus is on the charge of the forehead.

Aries is associated with the brow, head and the courage of the heart, the military, surgery, iron and sports.

The relationship of the sign Aries to the body. Aries is associated with the strengthened ridge across the eyebrows, and this is symbolized by the top of the glyph for Aries. The bottom of the glyph extends to the heart.

With the moon in Aries, there is action with feeling, need for independence, self-assertion, action and independence. There is also a tendency to be impulsive or reactive. Reinventing self through challenge and by being on one's own. Often, the mother is experienced as impulsive, independent or impatient.

When independence or self-directed action is lost, then often there may be an attempt to regain it by seeking attention, being argumentative, irritable, overly reactive, out of touch with feelings, acting out of emotions, hiding when hurt.

Aries can set themselves up for challenges with the Mercury Retrograde Cycle when they begin to let others define them. It is when their focus shifts as a result of others defining their enthusiasm and response that Aires is more likely to react seeking independence through impulsive actions and rash decisions, leading to carelessness and mistakes.