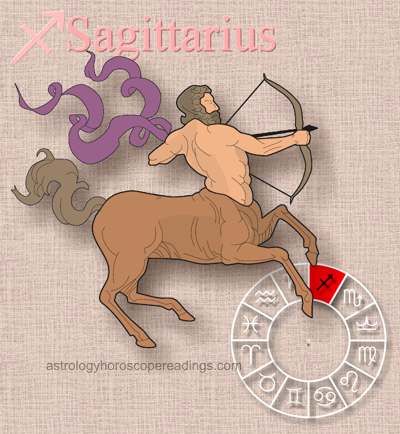 The Expression of Sagittarius

Sagittarius focuses on expansion, optimism and the sense of adventure. This leads to interests in expansive directions such as philosophy, religion, higher education and travel. There is often a focus on society, ethics and culture.

When pulled out of their inner knowing, intuition and trust, Sagittarius can over generalize with out checking the facts or other peoples beliefs. This can result in becoming judgmental, especially if the source is not from within, but from reactiveness, ego and past hurts.

The expansive energy of Sagittarius comes from a deep trust in the intuition that arises from the core and spirit. It becomes a source of inner knowing and leads to faith in the future. This expansiveness is the secret to the luck that follows faith.

Sagittarius rules the thighs, the largest muscles in the body. It is a fire sign ruled by the largest planet, Jupiter. It is associated with exploration, higher learning, religions, faith, social structures, humor and nature.

When Sagittarius is Established in Trust & Inner Knowing:

When Sagittarius Loses Connection to Trust and Intuition

Famous People with the Sun in Sagittarius

The Depiction of Sagittarius

The ancient image for Sagittarius is the Centaur archer, half human half wild. It is that connection between the two that allows Sagittarius to hear the inner truth and follow their intuition.

With the Moon in Sagittarius, there is a feeling for personal truth and a need for expansion. One feels and needs nature, adventure, travel and new horizons. Often the mother is experienced as free, loving nature and adventurous.

When not connected to their inner knowing and intuition, moon in Sagittarius increases their sensitivity if their own beliefs and assumptions are not accepted.

The classic way that sun in Sagittarius sets themselves up for the Mercury Retrograde Cycle is to ignore the details and to avoid checking or asking others for their input because there is a sense of 'knowing' what they are doing.

When that 'knowing' comes from intuition or an inner sense of one's truth, it can lead to the next positive expansion. But just as easily, if it does not come from this place, but instead comes from judgment based on a false premise, then it can lead to difficulties.

Often the hint for sun in Sagittarius that their sense of knowing is incorrect occurs when the choice is made to ignore checking the facts. It occurs in much the same way as when someone who is trying to lose weight decides to take a break in checking their weight for a few days. More often than not, the very avoidance is a hint that in fact their weight is going up. In a similar fashion, when Sagittarius avoids checking the facts, because they think they are right, then they need to re-examine their stance, because it is then that they are at risk of setting themselves up.