Validation in Science, Astrology and Mathematics

Occasionally, astrology has been questioned in terms of its validity by modern science. However, both science and astrology work because of their own respective process of validation. Any system of knowledge grows when it maintains an integrity with the information that it acquires.

What is interesting, is that in order to maintain that integrity, validation has to occur both on the outside, where it can be established in the field, and on the inside, through inner validation. Modern science has had a tendency to ignore the inner validation process.

Because astrology is a bridge between the inner knowledge of the spirit and the outer knowledge of how we manifest, it requires two separate systems of validation.

This is not unique to astrology. It is actually the human condition. We all have an inner reality that we experience and an outer reality in which we share our experiences with others, within our culture and in our interaction with the world around us.

For someone learning and practicing astrology, that process of validation has to occur on both levels; on the inside and on the outside. The information that they acquire from books and courses has to be tested and validated through their own experience on the inside as well as on the outside in order build an astrologer's trust of their field and its techniques. That validation is also necessary in order to maintain the integrity of astrology.

Systems such as modern science tend to disregard the inner reality, and so do not consider a validation process for what is disregarded in principle.

Nevertheless, the inner validation is an integral part of science in practice, and to disregard it is to disregard a major impact on how science actually works.

It is our direct experience that defines our own affirmation of truth and validity. This is the way of progress with yoga and meditation.

In a similar fashion, it is our own ‘Aha’ experiences, our inner ‘eureka’ moments where what we are learning or understanding comes together in a way where the sum is much greater than the parts, that we experience the validation of something. We have an experience of how it comes together, its truth, its relationship to something greater, the way it points towards the greater truth.

For many people, the ability to accept another person's viewpoint or an alternative perspective requires that we attain that inner 'Aha' that allows us to accept and trust what another is expressing. In a sense, it is only when we are able to connect the dots in a meaningful way, that we are able to 'understand' or accept what another is relating. And of course, our connection of the dots depends on our own history, associations and awareness, and so those dots will be connected in our own personal way. Yet, when we do connect them, we will affirm by saying something like, "yes, I understand" or "yes, I follow what you are saying".

The whole concept of a 'proof' is more a matter of 'show me', than it is about ‘convince’ me.

This may seem to some as a somewhat outlandish statement. You may say to yourself, “What do you mean? Does not 1 + 1 = 2? Is not mathematics a true reality? Is it not universal? Why would you say that it does not have a separate existence?

In this way, there is a history to the sequence, and it does not follow that we can move forwards or backwards with the ‘replacement” steps and automatically recreate the same path. Instead, all that we can do is preserve the ‘abstracted’ value.

For an insightful mathematician, much like a poet or musician, the path matters. The ‘abstracted’ value is less than the true value, because it has lost the inner validation. For a gifted mathematician, the mathematical equations are not just abstracted symbols, any more than inspired lines in a poem are just words representing a concept. The mathematics on the page are just a shorthand, a way to convey a greater revelation and vision that connects to personal insights and realizations. That symbolic shorthand leads to the to the ‘Aha’, to the sense of understanding the equation in its greater light. It is in that realm, in the place of inner validation, that mathematics progresses, where new insights lead to new directions.

Does even mathematics have a separate existence?

My personal answer is yes and no to both questions. Let me explain.

Mathematics can never be truly independent of its creators. Mathematics is a progression of abstract relationships and patterns, maintaining internal integrity to itself. But the direction it has taken, its historical development, is not self-defining. Although it maintains integrity, the vast extension of mathematics does not follow from 1 + 1 = 2. It follows from inner insights and inner validations, and these occurred in historical context.

We developed the concept of imaginary numbers, and to some extent the concepts of n dimensional matrices and wave functions to support theoretical developments in physics. Mathematics could easily have developed in other directions, while still maintaining coherence.

What mathematics is, is not so much defined by mathematics, as it is by the state of the person engaging mathematics. The same equation may be ‘obvious’ to two people. One person may understand it in a mundane and practical manner. The other may understand it as a part of a greater whole that unites complex understandings because of what they add to it from their own state. And then, of course, A third person may not have a clue what it means. 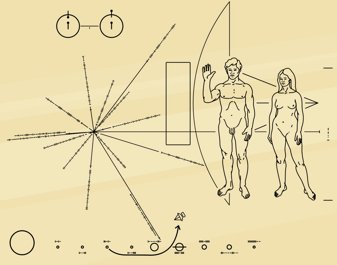 The gold anodized aluminum plaque that was sent out into space by the Voyager Mission.

We sent out a gold anodized aluminum plaque into space on the Voyager mission. It included drawings of a man and a woman, symbols of our solar system and its planets (at that time, Pluto was still a major planet!). And, we included a series of binary representation of the position and frequency of the nearest pulsars, with the understanding that aliens, on encountering all of this would understand the mathematics because it is deemed a universal language.

Even within different branches of science and social science, the individual mathematics have taken on unique dialects specific to each field. It is a consequence of the differentiation of knowledge that this has occurred. A physicist working with fields around a plasmom armed only with mathematics will he hard pressed to understand what a psychologist is doing working with dream empathy by extending their own mathematical equations.

The Differentiation of Science Prevents it from Being Universal.

One of the experiences that convinced me that science does not only exist in outer validation, occurred in my 4th year in Biochemistry. This was a transitional year on the way to graduate school, and so some of the classes were shared with graduate students. Of the actual classmates in my year, half already had a previous degree in the sciences. Some had masters degrees. One actually had a PhD in nuclear physics and a masters degree in engineering. Most of my classmates that already had a previous degree in science failed their year. Most of my classmates that were finishing their first degree passed. Why did this happen?

It happened because the people with previous degrees were trying to understand biochemistry through the concepts of their acquired degree. The student with the PhD in physics was a very brilliant man. He tried to understand biochemistry through the interaction of orbital fields. Each person that failed had tried to understand the new material with the older vision. It does not work. One branch of science does not reduce to another branch of science. Each has to be experienced anew, on the inside. It has to be validated on the inside first at the experiential level, and then it is understood and validated on the outer level. There is no objective reality. Those students that bought that concept, paid for it in a failed year.

Significance and Proof in Science

Science does not prove anything

This may take the reader aback for a moment, but it is a fact. This misunderstanding is often revealed in court situations when an expert science witness is called to establish the scientific proof or certainty of a piece of evidence. Often, when asked if they are certain or if there is absolutely no question, expert witnesses facing such a question tend to respond with statistics or an expression of the level of confidence or the unlikelihood that there is another possibility. And of course, the lawyers for the other side often try to exploit that there is still a degree of uncertainty, and thus a level of doubt, even though it may appear small.

Proof is replaced by the degree of confidence

In modern science, when a theory or a hypothesis is tested, it is considered validated according to how unlikely the results are estimated to occur by chance. In the physical sciences, validation tends to require that a result stand out from pure chance by an order of 1 in 1.7 million, or a certainty of 99.99994%. This is often referred to as 5 Sigma, essentially meaning that the level of uncertainty lies outside of 5 standard deviations from the norm.

This level of validation was required with the recent announcement that confirmed the observation of the Higgs boson, what the media called the ‘god particle’ from research at the Large Hadron Collider.

On the other hand, in the social sciences, where it is not possible to remove as many variables as in the physical sciences, validation is often presumed when results stand out from chance by an order of approximately 1 in 22, or a certainty of about 95 %. This is often referred to as 2 Sigma.

Confidence for what? When confidence is tweaked

There is a problem with statistics, even when applied to the physical sciences, and that problem has to do with interpretation, expectation and bias.

There is a tendency for most people, that when they expect a certain result, that expectation tends to create a level of bias, a tunnel vision. The tendency is to ignore, dismiss or not so much notice results that deviate from that expectation.

At a simple level, this creates a bias when a decision has to be made whether to include an observation or data point. For example, when looking at a result that may or may not be what you expect or that you are searching for, do you include it or do you ignore it? What if you don't understand it or don't have any idea where to put it, because it does not fall into an expected category?

When we examine scientific experiments conducted in the past, we tend to find examples where data was ignored or excluded. In some cases, what was excluded can be found in the raw data. Often, especially before the more widespread use of statistics in the middle of the 20th century, we can determine that this occurred because the published results were not consistent with the sample taken. The values were too ‘clean’.

This has been established with the work of some of the early pioneers of modern science, such as Mendel and even Newton, but to varying degrees it has been endemic, and if current surveys are accurate, it is on the increase, with competition for dwindling research funding.