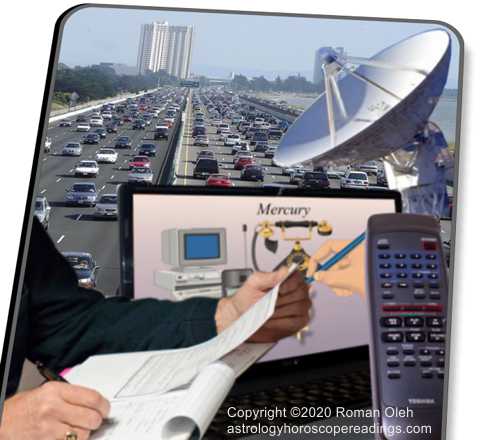 When Mercury is retrograde, there are often more challenges interacting and communicating and corresponding with others. Because Mercury rules our interaction with the neighborhood, our siblings, and local travel, these areas of our life show up challenges, unexpected delays, errors, challenges and extra effort.

When Mercury is retrograde, not only is there a greater tendency for these issues to express in our personal lives, but also collectively and cumulatively as the retrograde affects our community, communication and travel. Most of the time the retrograde is felt more directly by about a quarter of the population at a time, especially if the natal chart is strongly biased towards Gemini or Virgo, or if transiting Mercury forms a strong hard aspect to a significant part of a natal chart.

The Stages of Mercury Retrograde

The calendar for each year shows the main stages of Mercury Retrograde process by using a selection of colors: Pink, for the time when Mercury is retrograde, blue for the Pre-Shadow, and brown when it is in the Post-Shadow phase.

As Mercury is slowing down and is close to changing direction, there tends to be a stronger effect, and this is shown by a darker color.

As Mercury proceeds in its forward motion in the sky, it enters the region against the stars where it will later retrograde or appear to go backward. This period of time is referred to as the Mercury Pre-Shadow, and is shown in the calendar with a blue color.

Often it is during the Mercury Retrograde Pre-Shadow that incorrect assumptions, unfortunate short-cuts or lack of attention to details occur that are later revealed as Mercury goes retrograde.

As Mercury appears to slow down in its motion, before it appears to go backward in the sky, the effect of the Mercury Retrograde Pre-Shadow is intensified. This is indicated in the calendar with violet color.

There is a moment in time, when mercury by our line of sight has slowed down from moving forward and is about to appear to move backwards. That moment is referred to as the Mercury Retrograde Station, and often somewhat incorrectly as "Mercury Retrograde". This tends to be the most intense part of the Cycle, and is show in Red on the Calendar.

Then for about 3 and a half weeks or so, it appears to be going backwards in the sky - when Mercury is retrograde. Often mistakes, false assumptions and unfortunate 'short-cuts' are revealed at this time, and it is an especially important time to do due diligence and to check and recheck the details of important matters. For some people at this time, transportation and communication issues may develop.

At the beginning and end of this phase, Mercury appears to be moving relatively slowly, and is a more intense part of the retrograde phase. This is indicated on the calendar by a reddish brown color.

Towards the end of the retrograde period, Mercury has reached a place in its orbit where it begins to move in the same direction as the earth around the sun. The moment Mercury appears to stop moving backward and is about to move forewords is called the Mercury Direct Station. This is indicated in the Calendar with dark brown. As much as the Mercury Retrograde Station, discussed earlier, tended to be a focus of errors, false assumptions, lack of clarity and proper execution, the Mercury Direct Station tends to be a focus for revealing the consequences.

As Mercury appears to move forward again, it passes through the part of the sky where it had previously gone backward. This phase is referred to as the Post-Shadow, and is indicated by brown on the calendar. During the early part of this phase, Mercury is still moving slowly, and thus the effects are more intense. People often experience this phase of the cycle as a time when the consequences for not paying attention to details or asking the right questions become apparent.

Mercury Retrograde and the Sun Signs

Examples of the Mercury Retrograde Cycle

A classic example of the cycle occurred in the final grinding of the Hubble telescope mirror. During the Pre-Shadow, the assumption had been made that the deformation of the mirror due to the earth's gravity had been compensated for,prior to grinding. The Mercury Retrograde Proper would have been the grinding of the mirror with incorrect calculations. The Post- Shadow would have revealed that when it was in orbit, the surface geometry was now flawed, and a later shuttle mission had to be created to fix it by adding more lenses.

My personal experience, that indicated the importance of the post-shadow occurred many years ago when I purchased a computer system. Of course, I avoided the Pre-Shadow and the Retrograde. However, when I purchased the system during the Post-Shadow, it bought it a day after the price had gone up. During the Pre-Shadow and Retrograde proper, while I had been waiting and delaying the purchase, I had not bothered to ask the store if the price would stay the same.

Mercury Retrograde Can Be a Blessing

The retrograde cycle tends to reveal what is not working properly, and although it can contribute to delays and frustrations, it can also reveal issues that are important to resolve, fix or address.

It is a good time to deal with what you may have put on the back burner and for reflective and creative writing, inner work, journaling, spiritual work and completing long overdue tasks.

The Two Levels of Mercury Retrograde

Mercury retrograde occurs at two levels. At one level, there is not much you can do with the actions of others, except to be more conscious and prepare for delays and errors by double checking.

But at the personal level you can do a lot in order to avoid the consequences of Mercury Retrograde. Most of us encounter the consequences when we are not centered, aware or conscious of what is going on around us, and more often than not the culprit is that we are not acting from our heart and spirit.

Instead we are reacting from our needs, our hurts, from our buttons being pushed, or the way that we take care of others and not ourselves. In that way we act from our shadow, and that is what mercury retrograde is all about.

Mercury Retrograde occurs when it is moving backwards, into its shadow, and thus communication, scheduling, transportation and judgment becomes cloudy or error prone. As much as outer work is challenged by Mercury Retrograde, introspection and inner work is very supported. Take advantage of Mercury Retrograde by clearing your own tendencies to get caught up in your own shadows and those of others.

If you seek to take advantage of this opportunity, I heartily recommend you consider getting this book: It is a direct and practical guide back to your core and greater becoming, without the fluff. Being Centered.

Why does Mercury appear to go backward?

Mercury's orbit is closest to the sun. It completes its orbit in about 88 days, compared to the earth which takes about 365 days.

As a result, from our perspective we first experience mercury moving forwards as its orbit takes it between the earth and the sun.

Mercury then seems to slow down before appearing to move backward as its orbit is about to take it on the other side of the sun from our perspective. The moment it seems to hang in the sky before changing directions is the Mercury Retrograde Station.

From the earth’s perspective, Mercury continues to appear to move backward until its orbit takes it again to our side of the sun. We refer to the moment it slows down its apparent backward movement against the stars and is about to change direction from our line of sight as the Mercury Direct Station.

While Mercury continues to move forward on our side of the sun, against the stars, it remains in the Post-Shadow until it passes by the part of the sky where it earlier had started to be retrograde.

As Mercury continues to appear to move forward against the stars, it passes over the part of the sky where it will later make its Direct Station. That begins the Pre-Shadow phase.