Preface: The series of articles on Astrology and Science are a rebuttal to the ignorant treatment of astrology on some science sites such as universetoday.com. and are not meant to demean the true contributions that modern science has made.

In this article, I am addressing how modern science behaves very much like a totalistic system. In that respect, it has followed the path of other totalistic systems, in defining a world view where its own beliefs and defining principles are the only valid approach and understanding of the world around us.

Usually, the term totalism refers to political systems, where there is an absolute autocracy and authoritarianism; a system with unrestricted power and authority. The term originated during World War II, in reference to the dictatorships of the time.

However, another meaning to totalism refers to religious or philosophical beliefs that have become ideological totalisms, where an absolute system of beliefs are considered undisputable or that have ultimate authority. 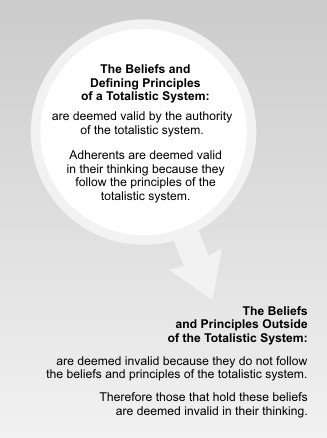 One of the traits of a totalistic system is that it defines the primacy of its own validity and at the same time defines other systems as invalid through the application of its own belief system, philosophy, or world view.

A corollary of ideological totalism, is that those ideas and even facts that contradict the ideology are held as invalid by definition, as they are outside of the ideology.

Ideological totalism has been written about and analyzed with reference to brainwashing and cults (see references at bottom). What these two have in common, is that there is a presentation of absolute truth or the process of attaining it, while at the same time the internal means by which an individual would arrive at their own truth is discredited unless they use the percepts and procedures that are dictated by the accepted ideology of those in authority.

What is interesting about ideological totalism is that it is not all that different in principle to the stance that modern science takes, both in practice and by belief system.

One of the things that not only science but ideological and political totalisms have in common is that they tend to emerge out of schisms. The totalitarian regimes that erupted during the first half of the 20th century did so in response to massive economic and political upheaval. One can argue that many of the cults formed as a result of very skewed interpretations of experiences of the human condition. Both forms of totalism seek to create order out of chaos by removing or discrediting that which is perceived to be in the way of progress. Both seek unity by discrediting or denying the other half of the whole.

What is science's schism?

Very simply put, science emerged out of the Renaissance faced with a political confrontation with the church of the day. It began as a serious confrontation. Bruno was burned at the stake. Galileo was under house arrest. Newton faced being exposed for his beliefs and tried for heresy. For the church, the new science was an immediate philosophical and material challenge. For the emerging science, the church was a formidable adversary, especially because the university system with its ecclesiastical affiliated colleges was largely under church control.

The resolution to that conflict was a political agreement that both parties have honored, more or less until the present. That agreement was for the church to maintain its supremacy over theology, religion, the soul, individual inner experience and spiritual maters. For science, the agreement was to pursue only the practical objective reality through its discourse and experiments, and not to wander into the realm of religion and spiritual concerns.

The schism for science was that it gave away the core of its original validity.

The schism for science was that it gave away its original pursuit of knowledge of both the outer reality and the inner reality. Modern science developed with a political compromise with the church, that laid the boundaries between the realm of the church and the realm of science. Science's realm became the material universe.

Putting bounds on early science's pursuit was the antithesis of what that pursuit was. It was what Bruno died defending. It was why Galileo was willing to face house arrest, and it is why Newton was willing to secretly pursue his studies of alchemy and his own investigations of his nner reality, while facing the prospect of heresy, if discovered.

Of course the irony is that over the course of time, the scientific view began to become the popular view and the accepted belief of modern civilization. This trumped the influence of the church in many ways, and so to some extent, the political agreement is unraveling. The search for scientific truth and the underlying theories that attempt to describe our universe have become at least for some, the theology of the present age. But that theology, for all of its accomplishments in describing the phenomenal world, does not accept that which it gave away in its original split with the church.

In a way, science's stance is a “catch 22”, in that the spiritual is defined to be outside the realm of science, but since science has become the theology of the present civilization and defines the known reality and what is “real”, spiritually is deemed unscientific and therefore not real. Thus much of scientific research into the spiritual is an attempt to understand it from the place of chemistry, physiology, brain function anomalies and superstition. Research that investigates the spiritual as it is, has resulted in loss of credibility, prestige and grant money for the unlucky researcher that ventured into this path. Thus those that have investigated spiritual matters have faced banishment from the scientific community. It a very real way, they have been “excommunicated”.

This banishment is not confined to spiritual matters, but also for honest or objective research that has explored the unknown or found evidence that may support alternative views that do not seem to have a simple mechanism of action, or contradict established beliefs. Such research that has included investigations into the memory of water, experiments with ”cold fusion”, and non gravitational explanations for dark mater.

The banishment typically results in not allowing this research to be published in main-line journals. However, where the research has contradicted established beliefs in a manner to suggest a major revision of established theory, some journals, like Nature have taken the added step of literally sending a team which included a magician, to attempt to discredit the researcher with the stigma of cheating, while using the cover story of looking for “loopholes”.

Why do Major Scientific Journals Banish Reputable Researchers When They Do New Research?

Why would major journals do this? The simple answer is to follow the money. Major journals act like an authoritative arbitrator of scientific validity and approval. They give credence to the research they publish. Researcher's careers hang in the balance of this acceptance. On the other hand, major journals get money through subscriptions and fees for publication. That cash flow is preserved by not rocking the boat or losing prestige and income by being labeled as a fringe publisher, or by giving credence to “questionable” research.

Having to review a controversial submission puts these journals in a dilemma. If the paper gets accepted, then they risk their reputation and readership revenue. If people were to find out that they refused to allow the article to be accepted through bias, or by not allowing review by proper channels, then their objectivity and honesty may become questioned. So they have at times resorted to undermining the reputation of the researcher. Bear in mind that in some cases, as occurred in the publication Nature some of these researchers had already received Nobel prizes or were already highly respected.

In her article in Today's Cults, Jan Groenvald elaborated on the subtle and far reaching processes that have been used in order to modify behavior as well as the techniques that have evolved and have been used for mind control. What is sobering is that there are parallels to the methods that Jan identified within the scientific community.

2. Thought Reform and the Psychology of Totalism By Robert Jay Lifton

In his book Thought Reform and the Psychology of Totalism, published in 1961, Psychiatrist Robert Jay Lifton examined the experiences of forty subjects that underwent “brainwashing” under the Chinese government. His book reaches beyond an analysis of their experiences, and in one chapter, sheds light on the use of an ideology of science raised to an absolute status.