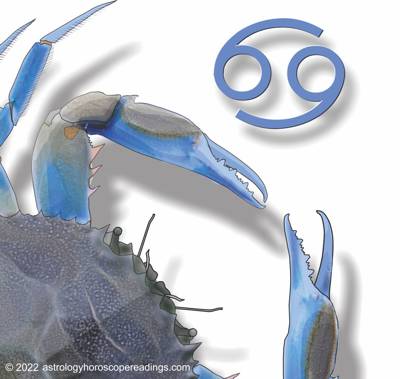 The Sign of Cancer is finely tuned to feelings, sharing feelings, and being receptive to the feelings of others. There is a natural affinity for family and nurturing. The Crab, as a symbol of the Sign of Cancer, has a hard outer shell protecting the softness inside. Another meaning for the Crab is that it carries its home, the shell, everywhere it goes. Cancers do not like to be without a home.

Cancer Signs are known for their memory and risk holding on to past hurts and negative emotional experiences. Their increased sensitivity puts Cancer at risk for absorbing and holding on to emotions, hurts, and past experiences. When Cancer does this, they can become defensive, sensitive, and protective of their feelings. The path to moving forward for Cancer is to extend their nurturing of themselves. When Cancer takes responsibility for caring for and protecting their feelings, they invite their healing.

Cancer rules containers, the stomach, and the skin. It is associated with family, the mother, home, nurturing, and formative stages of processes and growth, as well as beginnings and endings.

Cancer is Established in Their True Feelings:

Cancer Does Not Take Care of their Feelings:

Famous People with the Sun in Cancer

The image of the Crab for the sun sign Cancer is thousands of years old. It holds the qualities of a hard shell protecting a soft inside, but it also emphasizes the outer containment. Cancer rules the skin and containers in general. The other meaning of the Crab is that it carries its own home or protection wherever it goes.

The ancient Egyptian depiction of Cancer was the Scarab or Dung Beetle. It would push a ball of dung in the direction it wanted to go and jump on top whenever the sands got too hot. It always took its home wherever it went, and the home was kept cool through evaporation.

The Glyph of Cancer depicts two hearts, mother and child.

The Sign of Cancer is associated with containment, the stomach, and the skin. 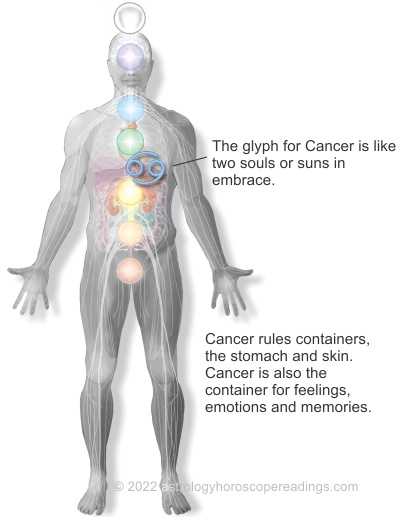 With the moon in Cancer, there are strong feelings and a need for emotional security. There is a natural affinity for nurturing, giving, receiving, and sensitivity for their feelings and to the feelings of others. Typically, there is a strong connection to the home, family, and especially with their mother and a tendency to be cautious and over-mothering of others.

When they do not take care of their feelings or hold on to their negative experiences, people with Moon in Cancer tend to seek refuge in the home, with family and close friends.

Cancer can set themselves up during the Mercury Retrograde cycle by being overly concerned with nurturing and taking care of the feelings of others and thus ignoring what they feel themselves. For Cancer, it is important not to ignore the impressions and feelings that may let them know something is off, unclear, or not quite right. When the focus is on others through nurturing or taking responsibility for how others feel, then this Sign can ignore important hints or overlook the right choices.

Another contribution to the Mercury Retrograde Cycle can occur when emotional buttons are pressed, pushing appropriate actions, choices, and communications to the side.