The Religion of Science

Have you ever wondered why science is actively looking for life on other planets and yet has systematically ignored the evidence and even vilified those that present evidence that that intelligent life may have visited us? 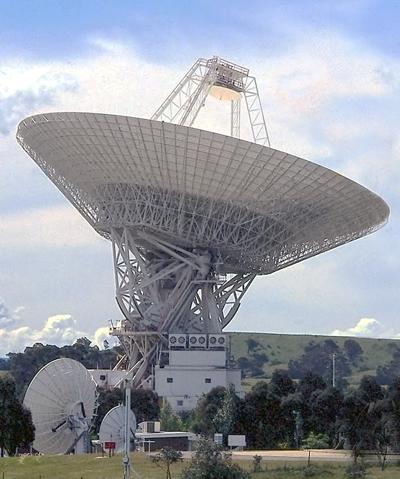 A radio telescope. We are actively searching for planets that may contain life as we know it. One focus, through SETI is to find evidence of advanced civilizations by searching for anomalies in radio frequencies.

In Our Own Image

One interpretation of what is going on, is that science wants to define what that life is, and not be defined by that life. In the former, we have the whole universe conforming to our principles and understanding. From that perspective we are co-creating the universe in our image, and we are declaring our science to be the true religion of the understanding of the universe.

To that end, there have been various attempts to show that life can be created from basic elements. Most famous of these was Urey - Miller experiment in 1953, when water, methane, ammonia and hydrogen were heated and exposed to electric discharge. The generated compounds were sequestered and sampled. 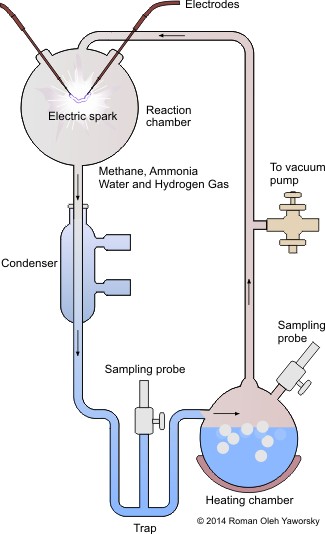 The Urey-Miller experiment of 1953 is a classic demonstration that more complex organic molecules can be formed from simpler molecules in conditions that were originally assumed to exist earlier in earth's history.

There is considerable debate as to what the Urey-Miller experiment demonstrated, because the sequestering artificially protected and concentrated the carbon compounds, many of which would be broken down again in real conditions. Geological evidence now shows that earth's early atmosphere would have tended to break down the compounds sampled in the experiment. More significantly, it created equal amounts of both left and right handed chiral versions, both mirror images of each other. The amino acids that form life are all left handed. The DNA is all right handed. It has been pointed out that the statistical unlikelihood involved in life ever developing from random left and right handed chiral versions of amino acids is beyond astronomical.

It turns out that there is only one way that it is statistically possible, and that is through a jump start in space. We now recognize a huge variety of organic molecules that are constantly formed in the nebula in space. It has been discovered that the light bathing them tends to be highly polarized, and depending on their location in relationship to magnetic fields and ion flow, there is a strong tendency to favor either left or right handedness in the molecules these nebula contain.

In the end, in spite of being included in a lot of high school science textbooks over the years as a demonstration of how life started on earth from simple molecules, what the Urey-Miller experiment actually showed was that life on earth originated or at least got a head start outside of the earth.

The conversion to science

In spite of the teachings and beliefs of religions, they they tend to expand not so much because they are right but because of conversion.

For quite a few religions, during a phase of their history, that conversion has often been by the sword. It occurred on the periphery or frontiers of the religion itself. It occurred with the conquerors, the conquistadors, and it occurred only too often through violence and destruction of what existed before it. We need not look further back than what happened to the native populations of the Americas, or villages in Indonesia, in the middle east or Africa.

More often than not, in human history, religion has followed the conquerors, even if the principles of each religion where largely ignored in the process. The same also applies in the way that science has expanded onto the cultural turf of modern civilization. The casualties have been other ways of understanding and investigating reality and the world around us. And yes, there have been casualties and the process of expansion, conquering and assimilation that science has taken, parallel very much the way that many of our major religions have acted during their times of expansion.

There is an interesting quote from Voltaire (Voltaire wrote this in his notebooks around 1740, and this expression has been misattributed to like minded writers such as George Bernard Shaw and Mark Twain):

"Si Dieu nous a faits à son image, nous le lui avons bien rendu. If God has made us in his image, we have returned him the favor."

One of the consequences of having an extra-terrestrial culture visiting us is that it would undermine our 'creation of our own universe' in our image'. They would be discovering us. It would turn the whole essence of our scientific objectification of our universe inside out. It is like the experiment defining us: We then become the experiment. We then become the object of the new conversion and not the active agent. It would not be so much that their science would be better than ours. It is that our science would be dismissed. It would no longer be the instrument of our seeking our truth. It would be their truth. They would not be adapting to us, we would be adapting to them, and of course, ironically, they would probably treat our science with contempt in a similar manner that we have done to those we have conquered or rebranded.

At the heart of the dilemma is that our science is rooted in the belief that science is universal as is mathematics. If that were true then we would be able to benefit from an extension of what we know and believe. But unfortunately, this is an assumption and not necessarily the case. The evidence that the latter is more likely is seen even within science itself: The different branches of science do not reduce to each other, or extend form each other. Each branch has its own mathematics, theories, terminology and concepts. The only thing that binds all of the branches of science together is the attitude used to objectify the world around us by replacing it with an abstracted vision. This is what would be the most at risk as another civilization imposed its vision on us.

It is no surprise then that science has largely avoided validating that we may have been visited. Most of those that undertook a scientific study of such phenomena have faced ridicule, loss of status in the community and rejection from the publication and peer review process. We seek to discover the life on other planets according to our science and not the other way around. We seek to brand them in our image and hold on to our truth. The alternative is anathema.

My experience with science fairs

I have an interesting perspective on the scientific response to the possibility that we have been visited by civilizations that are not our own.

In the early 60's when I was about 10, I decided to enter into one of the science fairs. In those days, I saw myself as a scientist, enthusiastic to apply science to the phenomena around me. I had no funds, and so I chose as my project the exploration of the reports of UFO sightings in my neighborhood and treat them as a phenomenon that could be addressed from a scientific perspective, using the scientific method. In other words, instead of identifying the phenomenon my focus was to determine if the sightings showed a pattern that could not be accounted for by random chance, misinterpretation, hysteria or contamination though sharing information between people.

In those days, the local libraries of small towns and villages around where I lived kept clippings from newspapers and magazines, neatly put away in folders according to different categories. As it happened, one of the categories was unexplained aerial phenomena, and the clippings of eye witness accounts described what people saw in their own words and also the location and time of each event.

The first thing I did was put the individual observations on a map with the time-line. I went from one small library to another in this quest. In those days, there were many neighborhood newspapers that typically published once a week and the readership was very local. These observations were not commonly heard on the radio, but were the news fillers on local newspapers. It meant that the observations tended to be contained locally. This tended to screen out cross-contamination, as it was difficult for witnesses in different locations to be aware of each other, unless they read about it.

I was careful to screen out the obvious. I was very much in love with astronomy in those days, and so potential observations of the planet Venus and the like were not included. These were very easy to exclude, because they did not show parallax, and additionally I used a guidebook that gave their positions each night.

Of course, my project was rejected for the science fair. It was deemed un-scientific and not representative of what the science fair was about. I was told to come back when I had something 'scientific'.

This was a pivotal experience for me. I had presented what I believed was an objective study, with rational conclusions and observation of a phenomena. It may be that it was rejected outright because it did not contribute a mechanism to explain the phenomena, but at the same time, especially in its earlier days, science was full of observational science, where the behavior of plants and animals was documented and categorized prior to developing working models and mechanisms to describe the behaviors.

What had emerged for me was a much larger phenomena than connecting the dots from newspaper clippings to create time lines and show that alternative hypothesis were not supported by the results. The response of science and scientists to unexplained aerial phenomena, and its rejection was something itself that invited study.

Why was the study rejected as a knee jerk reaction?

First of all, this example was by no means unique. It was simply personal. It taught me a lot more about science than I learned from the project itself. I also want to point out that there are currently now and have been in the past quite a few scientists that have pursued the phenomena. Unfortunately, most lost their reputation in the process. Very few continued this line of research.

The contradiction of ideals versus reality

What impressed me with what I did and the response was the non scientific way that it was dealt with. It was the response that a religion makes to something that challenges one of its main beliefs, or founding principles.

The very possibility of interacting with a culture outside of this domain puts us into their potential frame of reference, and thus their knowledge and power, and this ultimately questions the main beliefs of our science. Most religions refuse to be defined by other religions.