How Old is Astrology?

The orientation and geological condition of the Sphinx in Giza as well as the major pyramids, support an established astrology that dates back to at least 10,500 BC. Original illustration copyright ©2012 by Roman Oleh Yaworsky 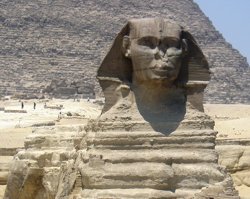 Many now believe that the original pyramids date from that time, and that much later, Khafre and others may have added or built over those sites.

A close look at the Sphinx reveals that the head is much smaller in proportion to the body and much younger, as it is significantly less eroded. Amenemhet II, Khafre, Khyfa and others are attributed with later re-carving or replacing that part of the Sphinx.

How Old is Astrology, Realy?

Many Historians trace the roots of astrology to ancient Greece and to the astrology of Mesopotamia and Babylon, but the evidence points to a much older origin to astrology.

We know that the fundamental basis of the astrology that we use in the west goes back at least 12,500 years, because of the orientation and geological age of the Sphinx. The Sphinx depicts the sign Leo, and it was erected facing the point in the sky where the astrological sign Leo rises on the first day of spring, about 10,500 BC.

The evidence for the age of the Sphinx is not only that it is aligned with Leo rising for 10,500 BC, but also that the erosion on the body of the Sphinx can only be attributed to rainfall, which did not occur in the region much after 10,500 BC.

For a long time, Egyptology placed the Sphinx in the reign of Khafre, or Khufa, at about 2,500 BC. However, several key pieces of physical evidence contradict this. As already mentioned, the weathering (as noted by geologist Robert M. Schoch) places it at least 8,000 years earlier. In addition to this, is the location of the three great pyramids at Giza and the Sphinx in relation to the Nile.

These structures reflect more closely the relationship of the angle of the stars in Orion's belt and the milky way as it would have been seen from Giza in 10,500 BC, and especially on significant days, such as the Spring Equinox. This orientation shifts over time due to precession and to a lesser degree due to the proper movement of the individual stars.

Because the Sphinx was obviously altered by replacing the much more ancient lion's head with that of Khafre or Khufa near 2,500 BC, it is likely that the pyramids were also altered at around the same time period, by re-facing them or extending their size, but maintaining their location.

This may explain in large part why some of the facing on the pyramids appears more recent than the orientation both of the structures relative to the sky and the internal site lines to specific stars which is more consistent with a 10,500 BC origin.

A fundamental component of astrology is the precession of the equinox and the great 'year' of around 26,000 years. Both the astrology of the Maya in South America and the Vedic Astrology of India reveal a clear understanding of this from very ancient times.

The difficulty in discerning what happened as we go back further in time, is that humanity faced a major cataclysmic event around 10,500 BC, that pushed much of the world into the stone age for several millennia. Most of the history that we know or have tried to reconstruct is really about the period of recovery from this event.

Unfortunately, most of the established literature and academic views embrace a history of humanity that largely ignores that this event ever happened. It tends to view references to this time as myth and legend.

However, when we piece together geological, archeological, mythic and written references, a coherent timeline begins to emerge that speaks of much older civilizations and more ancient roots to astrology.

Added to the confusion is that for the longest time, the event as a historical experience was ignored or denied, because the accepted views favored the onset of civilization emerging in the eastern Mediterranean or Middle East. That accepted view did not tolerate an age for the beginning of civilization that stretched backwards any further than about the 4th or 5th millennium BC.

Part of the controversy over the age of astrology is that historians have traditionally clung to a Mesopotamian origin for civilization. The accepted traditional view has been that civilization began in Mesopotamia around 3,500 BC and closely followed in Egypt and India around 3,300 BC.

Recent discoveries have shattered these dates and assumptions. One such discovery was the Nabta Playa site in Egypt. This site had a working calendar set in stone that also included a mirror of the pattern of Orion's belt and its main stars. It is set for the heliacal rising of Orion's stars on the first day of spring, 6,300 BC, predating Stonehenge by 3000 years.

Astrology and the Vedas

In India, one of the oldest references to a fully functioning astrological system is found in the Rig Veda. It's age is being constantly revised. For a long time, the date of the Rig Veda was set at around 1,200 BC through the work of philogists such as Max Muller, even though there was very little evidence to substantiate this claim.

We now know that the Rig Veda originated at least as early as 8,000 BC because it mentions a vast Saraswati river, that formed thousands of years before even this date as a result of glacial melt. After this date, this vast river system was significantly receding and by 2000 BC no longer existed. A number of the verses in the RIg Veda describe the winter solstice in Aries, which last occurred around 6,500 BC.

Other astrological events noted in the Vedic Scriptures Taittireya Samhita and the Taittariya Brahmana have dated the Vedas to 8,500 BC and 10,000 BC respectively.

Other astrological events noted in the Vedic Scriptures Taittireya Samhita and the Taittariya Brahmana have dated the Vedas to 8,500 BC and 10,000 BC respectively.