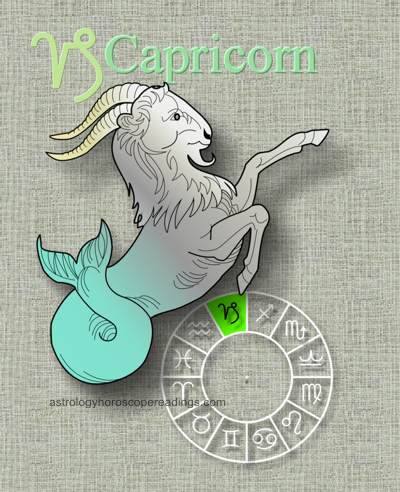 The Expression of Capricorn

Capricorn energy expresses itself in responsibility, respectfulness, and in conserving and maintaining structures, foundations and rules that hold and protect value. There is a natural tendency to approach by honoring. This is why the symbol is of a goat with a fish tail: Capricorn, by honoring is welcomed to extend their reach from the bottom of the oceans to the top of mountains.

Capricorn rules the knees, bones and teeth. It is associated with corporations, laws. authority and structures. Capricorn is ruled by the planet Saturn, that although ultimately fair, determines our rewards by our actions. Sun in Capricorn is pulled to preserve and maintain structures and the integrity of past cultural achievements.

When Capricorn is Honoring:

When Capricorn Loses Connection with Honoring:

Authoritarian, Using, The end justifies the means, The letter of the law, Bossy, Unearned authority

Famous People with the Sun in Capricorn

The Depiction of Capricorn

The ancient image associated with Capricorn is that of the upper part of a mountain goat and the lower part of a fish. We encounter the goat in the symbol of the fire sign, Aries and the fish in the water sign, Pisces. It reminds us that when Capricorn honors their foundation, their feelings represented by the fish tail, they are welcomed from the bottom of the sea to the top of the mountains.

The sign Capricorn is associated with the knees. It is our ability to lock these against the force of gravity during the process of walking and running as well as carrying loads that preserves our muscles from fatigue. The same principle applies to the elbows

With the moon in Capricorn, there is a need for establishment, security and to be honored. Security and emotional well being tends to come from accomplishment, effort and hard work.

The mother may be experienced as distant, cold, strict or conditional. With moon in Capricorn, honoring their own feelings is important, because when disconnected from taking care of them, there can be an over focus on goals.

Sun in Capricorn often sets themselves up during the Mercury Retrograde cycle by putting the cart in front of the horse so to speak. And then the horse tramples the cart. This can occur when an attitude of the "end justifies the means" ensues, and the consequences of the way the goal reached and its effect on moral is ignored. An over-focus on rules and goals can ignore the feelings and enthusiasm of everyone involved, and that in many ways is the horse. Mistakes and errors can follow when people feel used or do not feel well treated, or if Capricorn puts aside their own feelings or best interests because responsibility takes over. This is where errors and unexpected difficulties can occur that may not have been part of the 'plan'.

Other ways that sun in Capricorn can contribute to the cycle is through micromanaging, and not allowing the full expression and input of others. In this way more viable or effective solutions can be ignored.