Modern Science is Not the Only Valid Science 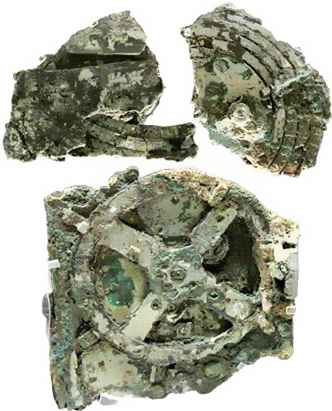 Larger fragments of the 2000 year old astrological Antikythera Mechanism, found off the coast of Greece. Originating in Babylon, these geared analogue devices were used by astrologers to calculate the positions of the sun, moon and planets, as well as the movement of the moons nodes and eclipses.

Fragments of much older geared instruments that appear to date back tens of thousands of years have also been uncovered, but their age and use have been too controversial for mainstream archeology. Image attribution Marsyas, Wikipedia

What does the word science mean?

One of the great misunderstandings with respect to modern science and other directions of knowing, such as astrology or the spiritual sciences has to do with the basic understanding of what is meant by the term ‘science’.

Modern Science can be described as the intellectual or practical activity that studies both the structure and behavior of the physical world through the means of observation and experiment.

However the word ‘science’ originally meant knowledge. It can be traced back to the Latin word ‘scire’ meaning to know, and ‘scientia’ meaning knowledge. We also get the word prescience, meaning foreknowledge, omniscience or anticipation, from the same root.

The creation of an objective hypothesis is a ‘magical’ process

On the other hand, the whole process of defining a hypothesis from a study of a phenomenon is a bit of a ‘magical’ process, because it carries with it bias or a belief system that may have little to do with what is being observed. That bias is essentially projecting an understanding unto the observation. In fact the observation itself is biased. The world that we perceive is a construct founded on our past experiences, and these in turn go back to previous experiences, and so on. We do not see what is there. We see what we think is there, and the two are not the same.

Out of practical necessity, measured variables are kept to a minimum. Assumptions are always made in determining how to isolate these variables, and how the other potential variables are excluded from consideration. Unfortunately, there is always the possibility that what is excluded is indirectly involved in the results. There is also a tendency to over-apply Occam's razor, which is a bias towards the less complicated hypothesis. Sometimes the simpler hypothesis is not always the correct choice.

These approaches have become a major problem in medical and pharmacological research, when the experimental conditions in vitro or animal proxy have been too much removed from the real life situations. When later applied to real life situations the mechanism of action, cross-interactions and human side effects have often been found to be much more complicated than at first assumed.

The objectification is not the reality

When we come to believe the objectification over the reality, then the tendency is to dismiss not only observations that contradict our objective view, but also those that participate in it. This is a repeating theme in modern science’s short history, and there are countless examples.

In the health sciences, stress and excess stomach acid were deemed the cause of ulcers, and thus a whole industry developed over reducing the pH of the stomach. Patients with ulcers were often told to go home and take a few days off work. Studies to investigate Heliobacter pylori as the casual agent were dismissed outright, until an Australian physician by the name of Dr. Barry Marshall ingested the bacteria to cause an ulcer and then demonstrated the antibiotic removal of both the microorganism and the ulcer.

For decades, the focus has been on fats as the culprits in creating heart disease, overweight and numerous other illnesses, while carbohydrates such as sugar, bread and starch was consistently overlooked as the major factor. In fact studies that investigated carbohydrates as the problem tended to be ignored or put into the questionable research category, not because they were not done well, but because they went against the prevailing belief. Of course, now, as a result, there is a major overweight health problem.

Science uses coincidence for the opposite meaning of what it is

Coincidence is a way of dismissing what does not fit expectations, by rejecting reality in order to preserve the expectation. It is interesting to point out the use of the term co-incidence. When two events that have a relationship occur but do not seem to have a simple mechanism in common, we tend to refer to the event as a co-incidence. Because there is no know mechanism connecting them, their connection is dismissed.on the other hand, ultimately, everything is connected.

Everything is co-incident in that sense, and if it were not then science would not work. From the point of view of quantum physics, once we become aware of two events, they are already entangled and co-incident. It is the bias of a causal point of view that dismisses a 'coincidence', rather than extending the willingness to investigate the phenomena as it is.

The Approach of the Spiritual Sciences

To a large extent, the spiritual sciences have accumulated their knowledge by inner experimentation. For example, the percepts of different traditions of yoga are meant to be followed in order to experience the fruit of the practice on the inside. The validation is experiential, and individual. It does not lend itself to statistical analysis, or to objectification or hypothesis that requires a mechanism of action. The validation is through the experience and state of the participant. It is experientially validated.

Outer validation occurs in sharing the same insights with another person, but ultimately, the validation occurs when it is experienced. Thus the knowledge that is shared is not the ultimate knowledge of the experience, but simply the means to that end. The outer knowledge holds the possibility of the inner awareness and experience in much the same way as a poem is only a means. Much depends on the reader.

This has been an issue in astrology and the other spiritual sciences. The extensive writings of astrology that hold validity do so because the author experienced the validity experientially. To now understand the literature properly, the reader has to do the same. Certainly they have to test the material that they learn through experimentation. Does it work as stated? Does it always work?

But that is only the first step. The next step is even more important. That step is to examine it inwardly, to contemplate it. If it is a good seed of information, that it will grow and sprout more understanding. It will connect with our inner knowing. If it does not, then it was likely only an opinion.

Some have made an effort to objectify the knowledge that the spiritual sciences hold and then to test these objectified constructs using a hybrid of the scientific method, but what they have actually examined is the map, not the experience of the state or the phenomena that are part of the inner experience.

The map is neither the spiritual experience nor the insight. In fact, if you are not familiar with the territory, a map is not of much use, and trying to understand it from ignorance not only leads to more ignorance, it also hold

Unfortunately, modern science has assumed that the way to understand the ‘inner’ knowledge is by using the tools and approach it has developed for outer knowledge.

That in itself would constitute an overreach or misapplication, but modern science has gone a little further than that. It has declared all of the phenomena that it can not easily address as unscientific. Thus for modern science, spirituality, astrology, consciousness, out of body experiences and the like are deemed un-scientific. And, because modern science assumes it is the only valid science, then if it is unscientific, it is a priori that these other pursuits are invalid.

Thus for many that adhere to the modern scientific view of the world, spirituality and astrology are not even worth looking at, and are instead relegated to examples of gullible superstition, dubious beliefs, folklore, fraud or deception. What else can it be if it is not scientific, according to modern sciences vision?

A Difference in Approach

The other way that the sciences can be divided is by the approach towards validating the knowledge that is gained or accumulated:

The Approach of Modern Science

For modern science, the process of experimental validation requires a mechanism, process or causal relationship to be constructed in the form of a hypothesis or conjecture that describes the mechanism of action. In that way its prediction can be tested experimentally

The confidence that the right mechanism has been established requires an analysis of the results, typically using a statistical null hypothesis. This is an inferential examination of experimental results, which takes the initial stance that no causal relationship exists and that observations result purely from chance. The alternative is the hypothesis being examined, and the degree of non-random behavior establishes the confidence that this hypothesis is pported by the observations.

There are several snags with modern science's approach in practice.

The process of the Scientific Method is meant to ensure an objective approach, beginning with an investigation of a matter leading to a testable hypothesis. The issue is that not all things around us lend themselves to this approach, without changing the nature of what is being tested. It is assumed a priori that all things are causal, are a process or have an underlying mechanism.

On the one hand, it is sort of like saying that if all you have is a hammer, then the rest of the world is a nail. Sometimes, you may simply have the wrong tool, the wrong understanding or you have made the wrong assumptions.