The Sun in Pisces 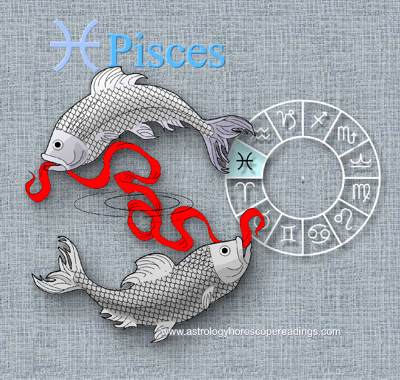 The energy of Pisces is open to being in the moment and to flow that can occur with spirituality, music, the arts, dance and the movies. There is a natural sensitivity that can tune to the dreams, impressions and ideas of others. This risks absorbing and holding ideas and experiences that can create confusion and separation from flow. To return to clarity and to avoid confusion, it is important for Pisces to become grounded in spirit on the inside.

The two fish represent the two directions of being: One direction moves with the flow and the experience of joy and aliveness. The other direction holds on to the wounds of the past. The sacrifice is to cut the binds to the past so that flow and faith can be restored.

Pisces rules the feet, especially the soles, and the very top of the head. It is associated with things that flow or bring that experience, including spirituality, water, imagination, dreams, ideals and the psychic world.

When Pisces is Connected to Their Spirit:

When Pisces Loses Connection with Their Spirit:

Famous People with the Sun in Pisces

The Image of Pisces

The ancient image of Pisces is two fish that are caught at the mouths on hooks that attach the two fish together. Often they are depicted as attached at the tails, in a similar way that the constellation Pisces is configured, but that loses the hidden meaning, which is that Pisces is trapped by what they let inside. As a result, one fish is out of its element, in the air, moving backwards, while the other fish must cut the chord if it is to freely swim.

The glyph of Pisces has been interpreted as the connection between souls. as the glyph is an abstraction of two moon crescents connected in the middle.

Pisces is associated with the feet, in part because the direction that Pisces chooses to walk is determined by their connection to spirit and soul.

With the moon in Pisces there is a need to be in flow or feeling in flow. There is sensitivity to feelings in general and to the feelings of others, to the extent of a tendency to 'feel the universe'.

Often the mother is empathic or there is a strong empathy with her.

The tendency of sun in Pisces people to tune to others and absorb their emotions, needs and negative patterns puts Pisces at risk of being more confused and to cloud their judgment and purpose. This can set them up for not looking at the details or checking if some of their decisions are in their best interests. It is important for Pisces to reestablish themselves by tuning to their own spirit and feelings in order to retain clarity.

Another way that sun in Pisces can be set up for the Mercury Retrograde Cycle is to avoid having a plan with tangible steps towards its realization. Pisces tends to trust that things will turn out ok, but during Mercury Retrograde, that trust may be misplaced.